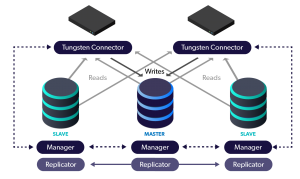 In this blog post, we describe the new Read Affinity tuning feature of the Tungsten Connector.

You may now fine-tune the affinity per user in user.map and via the global tpm configuration option connector-affinity.

Affinity is defined as the host (single cluster only) or dataservice (composite clusters) to prefer for reads, or in the case of Composite Multimaster, writes as well. 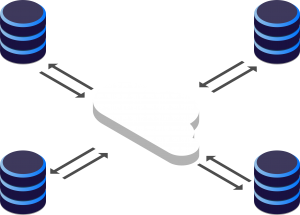 For example, consider a deployment with four sites world-wide consisting of a composite dataservice global, and four member dataservices (i.e. one cluster per site): east, west, north and south.

An application server at site west ideally will pull read data from a local cluster slave node because that would be faster than fetching it from another site. This is especially important when using the Primary/DR topology, where all writes are sent to a single Master in the Primary site cluster.

If the database layer at site west were to become unavailable, the the Connector will consult the affinity list and attempt to contact the next service configured. Having the Connector installed locally on the application servers further insulates the application from an outage, because the Connector is able to read and write data using other sites upon sensing a local cluster-wide failure.

This concept will apply to both Active/Active Composite Multimaster clusters as well as Active/Passive Composite Primary/DR clusters.

The affinity feature routes both reads and writes when using a Multimaster topology.

Dataservices not specified in the list, if any, will be used last and randomly.

It is also possible to exclude one or more dataservices by adding a hyphen (“-“) in front of the dataservice name.

When using Bridge mode, set affinity via the tpm option --connector-affinity, and when using Proxy mode, this is the syntax in the user.map file:

For example, to exclude site south from servicing read requests in user.map:

The above affinity string east,west,north,-south will try east, then west, then north. If none of the first three are available, a connection request would not succeed since south has been excluded by the negation (“-“).

In the following user.map example, dataservices north and south would be available as random candidates if the first two (east and west) were unavailable:

In future articles, we will continue to cover more advanced subjects of interest!